Noncontact sensors using capacitive and eddy-current technologies each represent a unique blend of advantages and disadvantages for a variety of applications. This comparison of the two technologies’ strengths will help you select the best technology for your application.

A quick reference with details below.

The primary functional piece of an eddy-current probe is the sensing coil. This is a coil of wire near the end of the probe. Alternating current is passed through the coil which creates an alternating magnetic field; this field is used to sense the distance to the target. The coil is encapsulated in plastic and epoxy and installed in a stainless steel housing. Because the magnetic field of an eddy-current sensor is not as easily focused as

the electric field of a capacitive sensor, the epoxy covered coil extends from the steel housing to allow the full sensing field to engage the target (Figure 2).

The sensing field of a noncontact sensor’s probe engages the target over a certain area. The size of this area is called the spot size. The target must be larger than the spot size or special calibration will be required.Spot size is always proportional to the diameter of the probe. The ratio between probe diameter and spot size is significantly different for capacitive and eddy-current sensors. These different spot sizes result in different minimum target sizes. 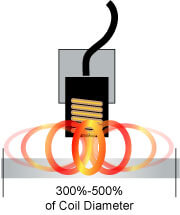 When selecting a sensing technology, consider target size. Smaller targets may require capacitive sensing. If your target must be smaller than the sensor’s spot size, special calibration may be able to compensate for the inherent measurement errors. 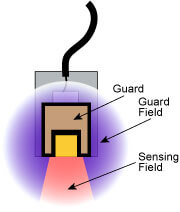 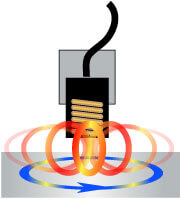 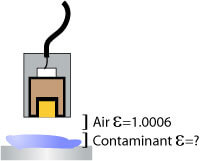 In some applications, the gap between the sensor and target can become contaminated by dust, liquids such as coolant, and other materials which are not part of the intended measurement. How the sensor reacts to the presence of these contaminants is a critical factor in choosing capacitive or eddy-current sensors.

Because of the sensitivity to the dielectric constant of the material between the sensor and the target, capacitive displacement sensors must be used in a clean environment when measuring target position.

The dielectric sensitivity of capacitive sensors can be exploited for use in sensing the thickness or density of nonconductive materials. For more information on this type of application, please refer to our Capacitive Sensor Theory TechNote.

For this reason, an eddy-current sensor is the best choice when the application involves a dirty or hostile environment. Lion Precision eddy-current probes are rated at IP67 and can even be used completely immersed in non-corrosive liquid.

Capacitive and eddy-current sensors have different requirements for target thickness. The electric field of a capacitive sensor engages only the surface of the target with no significant penetration into the material. Because of this, capacitive sensors are not affected by material thickness.

More detail can be found on the Minimum Recommended Target Thickness TechNote.

Capacitive and eddy-current sensors respond differently to differences in target material. The magnetic field of an eddy-current sensor penetrates the target and induces an eddy current in the material which creates a magnetic field that opposes the field from the probe. The strength of the eddy current and the resulting magnetic field depend on the permeability and resistivity of the material. These properties vary between different materials. They can also be changed by different processing techniques such as heat treating or annealing. For example, two otherwise identical pieces of aluminum that were processed differently may have different magnetic properties. Between different nonmagnetic materials such as aluminum and titanium the variance of permeability and resistivity can be small, but a high performance eddy-current sensor calibrated for one nonmagnetic material will still produce errors when used with a different nonmagnetic material.

An eddy-current sensor can be mounted to measure the runout of a rotating shaft. But even if the shaft is ideal, with absolutely no runout, a high resolution eddy-current sensor will detect a repeatable pattern of changes as the shaft rotates (Figure 8). These changes are a result of small variations in the material. This phenomenon is well known and is called electrical runout. These errors can be small, often in the micron range. Many shaft runout applications, especially those in hostile environments where eddy-current sensors are the norm, are looking for much larger errors and can therefore tolerate these errors. Other more precise applications will need to use techniques to address these errors or use a different sensing technology such as capacitive sensors.

Because of differences in the sensing physics and the associated differences in driver electronics, capacitive and eddy-current sensors have different probe operating temperature ranges and vacuum compatibility.

Capacitive and eddy-current probes can both be used in vacuum applications. Materials in the probes are selected for structural stability and minimized outgassing under vacuum. Vacuum compatible probes are subjected to an extra cleaning process and special packaging to remove foreign materials that may threaten a delicate vacuum environment.

Figure 9. Interference occurs when
eddy-current probes are
mounted near each other.

Because of differences in the shape and reactive nature of the sensing fields of capacitive and eddy-current sensors, the technologies have different probe mounting requirements. Eddy-current probes produce comparatively large magnetic fields. The field diameter is at least three times larger than the probe diameter and greater than three diameters for large probes. If multiple probes are mounted close together, the magnetic fields will interact (Figure 9). This interaction will create errors in the sensor outputs. If this type of mounting is unavoidable, sensors based on digital technology such as the ECL202 can be specially calibrated to reduce or eliminate the interference from adjacent probes.

The magnetic field from an eddy-current probe also extends about one and a half diameters behind the probe. Any metallic objects in this area, usually mounting hardware, will interact with the field and affect the sensor output (Figure 10). If nearby mounting hardware is unavoidable, sensors can be calibrated with the mounting hardware in place which will compensate for the effect of the hardware. 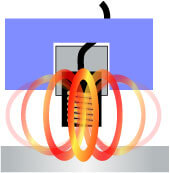 The electric fields of capacitive probes are only emitted from the front surface of the probe. The field has a slightly conical shape resulting in a spot size about 30% larger than the sensing area diameter. Nearby mounting hardware or other objects are rarely in the field area and therefore do not affect the sensor’s calibration. When multiple, independent capacitive sensors are used with the same target, the electric field from one probe may be trying to add charge to the target, while another sensor is trying to remove charge (Figure 11).

This conflicting interaction with the target will create errors in the sensors’ outputs. This problem is easily solved by synchronizing the sensors. Synchronization sets the drive signal of all sensors to the same phase so that all probes are adding or removing charge simultaneously and the interference is eliminated. All Lion Precision multiple channel systems are synchronized, eliminating any concern about this error source. 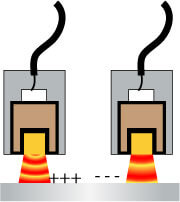 Figure 11. Nonsynchronized capacitive
sensors will interfere when
used on the same target.

There are many factors to consider when choosing between capacitive and eddy-current displacement sensors. Any application that involves measurement area contaminants such as liquids or waste material requires eddy-current sensing. Capacitive sensors require a clean environment.

Because capacitive probes interact with the surface of the target, the material thickness is not a factor in capacitive measurements. Eddy-current sensors have minimum target thickness requirements.

Capacitive sensors have no sensitivity to the target material provided it is conductive. Eddy-current sensors are sensitive to material differences and must be calibrated to the application’s target material.

A capacitive probe’s small sensing field, which is directed only at the target, prevents it from sensing mounting hardware or nearby objects. Eddy-current’s large, surrounding sensing field can detect mounting hardware or other objects if they are too near the sensing area.
Two other specifications differ between the two technologies: resolution and bandwidth. Capacitive sensors have higher resolutions than eddy-current sensors making them a better choice for high resolution, precise applications.

Another difference between the technologies is cost. Generally speaking, eddy-current sensors are lower cost.

This review of the differences between capacitive and eddy-current sensing technologies will help you determine which technology is the best choice for your application. Please contact us for more help in selecting the best sensor.