Accuracy Limitations of the Single-Channel Method

If the part moves toward one sensor, it moves away from the other; the changes in the sensors outputs will cancel each other. This eliminates the errors that would result from single-channel problems with deformity and/or contact with the reference surface.
The part can be measured with one sensor mounted in the resting surface, or the part can be otherwise suspended between the two sensors. 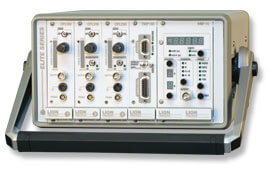 The Elite Series of capacitive sensor systems can provide precision sensing capabilities (CPL190 Driver) with a display module (MM190) that displays the measurement in actual dimensional units. The MM190 can also perform the summing operation for dual-channel thickness measurements. Sensor Plug&Play compatibility makes for easy use with LabView™.