1. Place a part of known thickness on the reference surface .

2. Adjust sensor to measure the top surface of the part. The sensor should be positioned near the center of its measurement range to allow for positive and negative deviations from the reference measurement.

3. If possible, adjust the sensor output for zero volts or a displayed reading of zero if a measurement display is being used. Otherwise, record the “master” measurement for reference when measuring test parts.

4. Replace the reference part with a part to be measured.

Dual-channel thickness measurements place the part to be measured between two sensors (Fig. 3). Each side of the part is measured by a separate sensor. The sum of the measurements from the two sensors provides the final measurement of thickness (Fig. 4). If the part moves toward one sensor, it moves away from the other; the changes in the sensors outputs will cancel each other. This eliminates the errors that would result from single-channel problems with deformity and/or contact with the reference surface.

The part can be measured with one sensor mounted in the resting surface, or the part can be otherwise suspended between the two sensors.

1. Place a part of known thickness between the two sensors.

2. Adjust sensor positions to measure the top and bottom surfaces of the part. The sensors should be positioned near the center of measurement range to allow for positive and negative deviations from the reference measurement.

3. If possible, adjust the sensor outputs for zero volts and a displayed reading of zero when using a measurement display with summing capabilities (see recommendations below).

4. Replace the reference part with a part to be measured.

5. Read the thickness deviation from the display with summing capabilities or calculate the deviation by adding the two output voltages and converting to dimensional units.

One of the biggest challenges in making high-resolution thickness measurements is the design of the probe mounting system and the way the test material is positioned in the measurement area.

Any changes in distance between the probe and target surface will register as thickness changes in a single probe system. Anychanges in distance between the two probes in a dual probe system will register as a thickness change. When making measurements at a precise, sub-micron level, movement of the probe mounting system that it is too small to be seen will skew the measurement results.

Rigid probe mounting and test material positioning is critical to precise results. Any vibration, thermal expansion/contraction, or other movement of the probes or material will prevent reliable results. Do not take this lightly; if you want to measure microns, you must control probe position stability better than microns.

A common thickness measurement application is to monitor material thickness as it is conveyed during processing. This sometimes means the material is hot. In addition to all the concerns about probe and material position stability during conveyence (see below), the hot material will heat the probes. All non-contact probes have some sensitivity to temperature changes. Varying temperature of the probes will mean varying measurements of thickness.

The thermal specifications of the sensors must be considered and calculated for the application; shifts due to thermal changes must be less than the desired precision of the thickness measurement.

In more extreme cases, probes may heat beyond their environmental limits and be damaged. Environmental specifications of the probes must be considered for the application.

Thickness of Material Passing Over a Roller 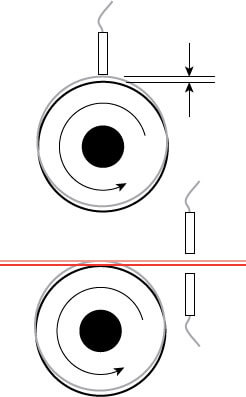 Measuring thickness of a material as it passes over a roller presents difficult challenges.

The roller’s ‘runout’ (radial movement of its surface as it turns) is almost always larger than the precision required for the thickness measurement.

Using a single probe directly over the roller to monitor the material’s top surface will not work unless the roller runout is considerably less than the precision of the thickness measurment; this is rare. With more extreme runout, the roller runout may be larger than the measurement range of the probe, especially if the probe is small.

If the measurements stay in range, it is possible to compensate for roller runout. The system can measure the runout of the roller and subtract it from the thickness measurement. But the probe monitoring the runout must be near and at the same angular location as the thickness probe because the runout is not consistent at all locations on the roller.