The Spindle Error Analyzer features the Elite Series of high-performance capacitive sensors. These sensors provide a dual-sensitivity option, nanometer resolutions, and optional temperature modules. One cable connects the sensors to the software which reads all of the calibration data directly with no need for operator data entry. Precision master-ball targets, with nanometer roundness, mount directly in tool holders and lathe chucks. Probe mounts secure the capacitive probes at precise locations for reliable results. Up to seven temperature sensors enable you to understand how your machine changes with temperature at multiple locations: ambient, spindle, frame, table, etc.

The Spindle Error Analyzer software collects data from the sensors, calculates error motions, and displays numerical and graphical results. Up to four test windows can be viewed simultaneously, or any test window can be viewed full screen. Test data can be archived for later viewing and comparison with future tests. The software includes windows for configuration, photos, probe setup, and system diagnostics; a complete on-screen help system is included. 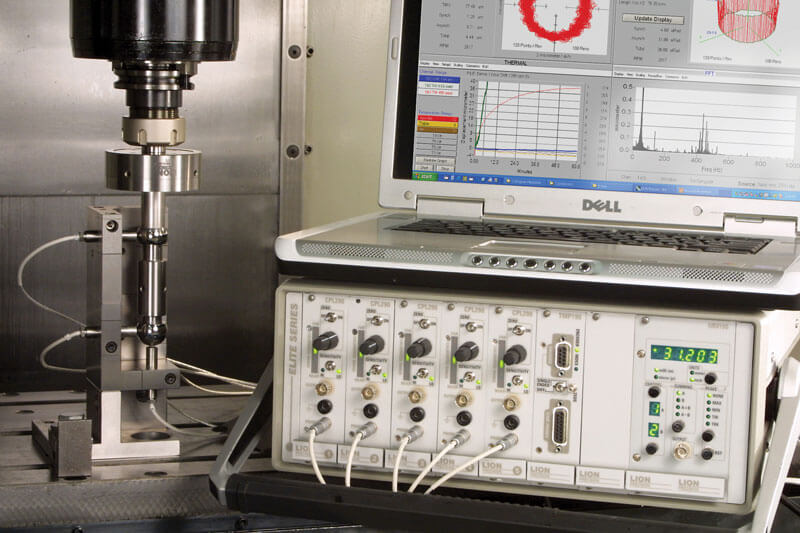 The Spindle Error Analyzer performs tests in compliance with these standards:

Proprietary software collects readings from the probes while the spindle is
turning, analyzes the results, and reports them on screen with numerical measurement values and polar or linear plots.

Using a probe pair in the X axis or Y axis, spindle tilt is measured and displayed at different angular locations. Display either standard polar plots or 3D plots. The test allows prediction of performance at any location along the spindle axis. Tilt measurements indicate the increase in error sources as the workpiece or tool are extended farther from the spindle face.

Axial Error Motion acquires displacement data from one probe in the Z axis. The probe measures the axial displacement of the spindle. Spindle angular location data is also required which is obtained from the eccentricity measured by another probe in the X or Y axis or an index or encoder signal. In addition to a polar plot, axial error motion can also be displayed in a linear, oscilloscope type display.

The FFT analysis test acquires data from a single probe and displays the relative amplitude of its frequency components. A graph of amplitude vs. frequency is produced. The graph is updated once per second, showing the FFT results on the most recent data set. FFT data is used in identifying bearing frequencies, resonant frequencies, harmonics, RPM, and structural vibration.

Stability tests measure the effects of heat produced by the spindle itself during operation. These short-duration tests are performed while the spindle is rotating. This measures changes in relative position between the tool and workpiece which affect machine tool performance, such as: location of features on a part at any distance from the spindle face, location of a hole, depth of a hole, location of a contour. The test also isolates simple X and Y motion from more complex tilt motions.

Generate a spreadsheet of consecutive test runs. Check performance over time or at different spindle speeds. Information can be linked to an Excel spreadsheet for later graphing, printing, sharing, and custom analysis.

“Troubleshooting by simply looking at unsatisfactory and out-of-tolerance parts is difficult at best. The use of proper measurement tools provides the quickest and most accurate path to identifying causes and solving problems.”

“Routinely measure machines in your shop to know their health and condition before they make bad parts, before they breakdown. That’s the great advantage – to be in command of your destiny – to be able to direct the machines to do what you want them to do.”

“They wouldn’t need a tenth of those inspection rooms at the other end and they’d make parts right the first time.”