One of the key components of a machine tool is the spindle; the machine could have a perfect structure and guide-ways, but if the spindle axis moves, the work-piece will present geometrical form errors [1]. Through the years several methods have been developed to characterize spindle axis motion from crude run out tests [23], to several contact and non-contact methods using LVDT’s, inductive probes and capacitance probes [5]. Today the most accepted method uses a master target and capacitance probes instrumented and connected to a personal computer where all the calculations are made.

This modern axis motion measuring instrumentation is capable of sub-micron resolution and accuracy. This equipment mostly finds its place in air bearing and hydrostatic spindle research and manufacturing, since the machines where these are used require ultraprecision components. While this may be true, modern spindle axis motion measuring is also a valuable resource for the Super Precision® machine tool manufacturers[4]. The information acquired from these measurements can help in finding spindle defects and their sources. It can also identify if certain assembly process changes have a positive or negative impact. In the following paragraphs it will be shown how the measurement of spindle axis motion provides valuable advantages to the Super Precision® spindle manufacturer.

The part roundness is determined by a test cut performed on the completed machine. At this point the spindle has been assembled on the machine, where several covers and support systems have been installed. If the spindle does not meet the required specification, it will be rejected and several hours of assembly time are wasted. This creates the need for a spindle quality performance test. For a Super Precision® turning center the roundness should be under 0.50µm (20µin). The manufacturing process to achieve this roundness has been established and for the most part is stable.

Nevertheless if a nonconforming spindle is detected before it can be installed on the machine, unnecessary waste is avoided. Measuring the roundness of the spindle requires a source of driving power, a work-holding device for the sample part and a guiding system for the tool. Supplying all these elements for a spindle which is not installed on the machine tool is impractical, cumbersome and can introduce additional errors to the roundness measurement. Taking these factors into consideration, it was determined that the most feasible characteristic to measure when the spindle is outside the machine tool is the spindle axis motion; which subsequently can be correlated to spindle roundness.

The spindles being measured are used in a super precision turning center. The spindle is driven by a multi-strand V belt transmission when installed on the machine. During the production process the spindle requires a run-in procedure to purge the grease. At this stage performing a spindle measurement is ideal since it can be easily instrumented and driven. The main objective, after the spindle axis motion has been acquired, is to find the relationship between this information and the part roundness. 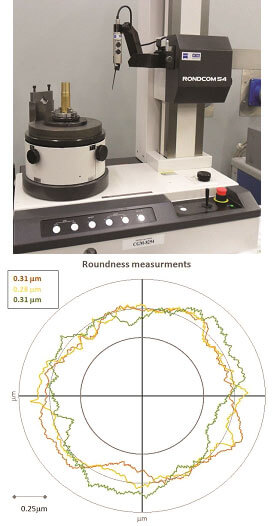 The spindle axis motion is measured using a 3 channel LION precision© spindle analyzer when mounted on the run-in bench. In general terms this equipment is a set of capacitance probes that measure the relative distance from a master target when the spindle is rotating. All this data is processed by the spindle analyzer software [5]. The capability and amount of information that can be obtained from this device are immense, however, we will concentrate on the radial motions of the spindle since they are related to part roundness.

The capacitive sensors are secured by a probe nest, which is mounted to a fixture that has fine adjustment screws for alignment; as shown in figure 2.

In addition, the noise of six different spindle setups in the running bench with the spindle stopped was measured. It was found that the average peak to peak value of the noise is 0.07µm. Since this value is an order of magnitude smaller than what we are looking for, the measurements can be considered reliable. The noise contains some frequencies on the 60 Hz range and its harmonics, most likely introduced by the surrounding electrical systems. In case the idle noise levels are on unacceptable range, the measurement setup is checked and the detected noise sources are eliminated. 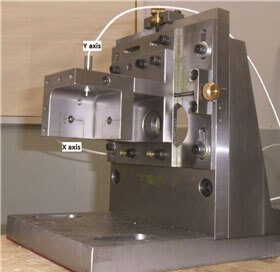 The signals from the X & Y sensors are logged at a sampling frequency of 5kHz. The data of these two channels are plotted on a rotating sensitive direction graph by the spindle analyzer software. This graph is visually inspected to detect any major anomalies or problems. Our main interest is the data collected by the X axis probe, which is the sensitive direction. For a lathe the sensitive direction is where the tool is perpendicular to the axis of rotation on the X-Y plane. Any spindle motion along this axis will have a direct effect on machined part roundness [1].

Several approaches exist to analyze the error axis motion, from simple time domain techniques to advanced frequency domain filtering [1],[6].  The synchronous (or average) error motion has been selected as the main analysis parameter, due to its stability and self filtering nature. The synchronous error is the component of the total error motion that occurs at integer multiples of the rotation frequency [5]. It is typically obtained by averaging a certain number of revolutions and calculating the distance between the minimum and maximum inscribed circles. From the physical point of view it also makes sense to use the synchronous error, because during the cutting process most of the asynchronous errors will be part of the surface finish[1] and not the form. 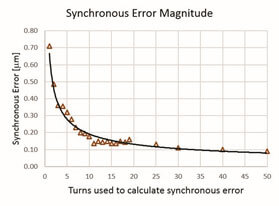 To simplify the axis motion measurement, no encoder is used; the angle of rotation is obtained by leaving a small amount of eccentricity (10µm) on the master target. This adds a sinusoidal component to the sensor data, which is removed by fitting a least squares sine wave to the data. The fitted sine wave is also used to obtain the rotation angle of the spindle.

To obtain a value for the expected roundness the spindle axis synchronous error was calculated by dividing each revolution in 2 degree intervals, averaging the motion for 10 turns, and taking the difference between the maximum and minimum averages. This calculation is considered as the mean roundness; however, this value is not a full representation of the process. With this in mind, the values that define the maximum and minimum over the 10 turns are used to obtain the standard deviation. With the means and the standard deviations the Student t-distribution [7] is used to calculate the upper interval of confidence for the maximum and the lower for the minimum. The difference between these intervals is our expected roundness. Figure 4 shows the steps used to calculate the expected roundness.

A confidence level of 99% was selected since the main objective is to avoid installing a bad spindle on a machine. When this happens a great amount of time and money are wasted. 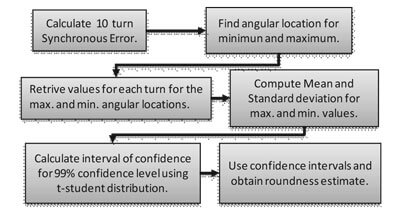 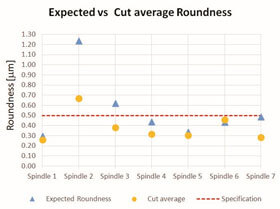 The proposed approach was applied on 7 production spindles, by measuring the axis motion on the running bench computing the expected roundness and then measuring the roundness from test cuts. These results are shown in figure 5.

It can be observed that six of the seven expected values were accurate in predicting if the spindle would pass or fail the roundness cut.

Spindle 3, where the expected roundness indicated that the spindle would not pass, shows that the method works as a failsafe. Since qualifying a bad spindle as good is much more costly than the opposite scenario. When the prediction is a higher roundness value than the maximum allowed (0.50µm), the spindle is further checked to determine if a fault exists.

When using the spindle error axis motion an expected roundness can be computed with a confidence level of 99%. This provides a valuable tool for manufacturing, avoiding the assembly of spindles that will not pass the roundness cut.  It is understood that some inherent variability comes from the machine assembly and not only from the spindle axis motion. Examples of machine assembly factors that affect roundness include: balancing, axis vibration, machine stiffness, part material, tool material, cutting parameters, auxiliary equipment vibration, etc. Taking this into consideration another benefit of the proposed expected roundness computation is that it can help to pin point if the problem is on the machine or spindle assembly.

The authors wish to thank all the support of Terry S.  George C. and Matt B. during the development of this methodology. Furthermore we like to acknowledge Hardinge Inc.